One of the scientific fields of research at Bion Institute is measuring effects of (ultra)weak radiation from various sources. This radiation cannot be measured with ordinary measuring devices. Even many less conventional devices are not yet capable of measuring this kind of radiation (in physical or chemical effects) reliably enough – but the technology is constantly developing also in this direction. Mostly, this kind of radiation together with its effects (physicochemical and biological) cannot be explained by a commonly accepted theories, although some scientists have offered possible explanations.

Bion Institute is specialized for measuring biological effects of weak emission of various products, for which the manufacturers cannot confirm their statements in a conventional way. In many years of research, the Bion Institute developed a series of tests which enable us to use human organism or water to detect such weak emissions and determine their general effects. The customer Coral Club International, Inc. ordered a testing of their product Coral Mine calcium and its influence on water. We performed the pilot research using BionEvapo® method to compare the influence of Coral Mine and effects of sand of similar composition and particle size. 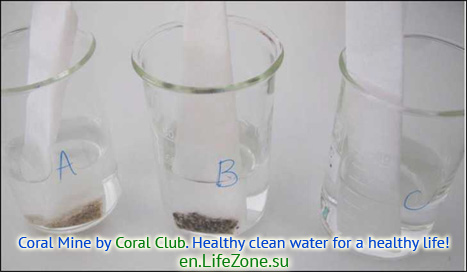 The BionEvapo® method is a standardized, science based method for observing and analyzing changes in water structure caused by various external factors. A thoughtful combination of methods and procedures enables us to study long-term effects of these factors on water and evaluate its dynamic structure that is difficult to determine with conventional procedures. The method consists of creating drops of different samples on clean microscope slides and drying them under defined conditions. Afterwards, we can analyze patterns of mineral remnants that are left on the microscope slide after the water droplets evaporate. We observe the textures, formed under different test conditions, with dark field microscopy, and evaluate the photos (evapo images) by visual assessment and by special computer programs for textural analysis of photographs (Figure 2). The computer processing of the evapo images shows some of the structural changes that happen in water samples exposed to various influences. 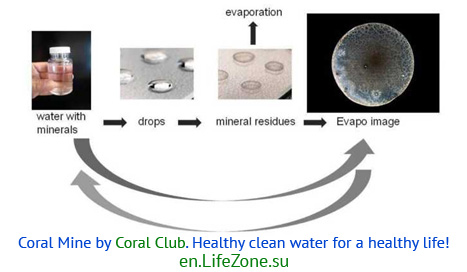 First, we weighted lg of Coral Mine or 1 g of control sand and put it in a paper tea bag. We filled three beakers with control water and took samples to prepare drops (time 0 = TO). Then, we put a tea bag with Coral Mine in the first beaker, control sand in the second beaker and empty tea bag in the third beaker. We removed tea bags after 30 minutes and prepared drops again (time 1 = Tl). After additional 30 minutes, we prepared the last set of drops from each beaker (time 2 = T2) to observe the changes of water after the removal of Coral Mine.

After the test, we observed the mineral remnants of the evaporated water drops under a microscope, we photographed them, and we analyzed them with two computer programs for 3 different texture analysis:

Figures 3-7 show the most typical photos of mineral remnants of the evaporated droplets before the test (time TO), immediately after the test (time Tl) and after additional 30 minutes (time T2).

Figure 3 shows the mineral remnants of the Coral Mine water drops. It can be seen with the naked eye that the drops before and after the test differ from one another. Textures of mineral remnants before the test (TO) have all the typical signs of standard water: the edge is well defined, mineral remnants cover almost the whole surface of drops, occasionally forming various fractal patterns. At time Tl, the drops look entirely different. Although the structure partially resembles the typical standard water (see Figure 5), it’s also obvious there are additional minerals, the edge is thus thicker and the whole surface of drops is more densely covered. At time T2, the typical standard water structure is lost, mineral particles are moving towards the edge, leaving the center empty in most drops.

Figure 3: Coral Mine – evapo images of typical water drop mineral textures before (TO), immediately after the test (Tl), and at additional 30 minutes after the test (T2) (40x magnification).

Figure 6 shows typical drops prepared immediately after the test (timeTl). While it’s almost impossible to distinguish between the textures of control water drops and water exposed to control sand, we can see that drops of Coral Mine water formed significantly different textures.

In frequency distribution analysis of the distances between pixels, the important parameters are the shape of the curve, the position of the peak, and absolute values. Figure 7 shows the frequency curves of the evapo images texture analysis for Coral Mine, control sand and control water at times TO, T1 and T2. We can observe significantly higher absolute values of Coral Mine curves after the test (Tl, T2) compared to Coral Mine in TO and to control sand or control water in Tl and T2. Also, a peak of the curve shifted to the right, from 22nd consecutive distance to 74th in Tl and 81st consecutive distance in T2.

In control sand and control water, the shift of the peak to the right and a higher number of distances was also observed after the test compared to TO. However, these changes were much smaller compared to Coral Mine. Changes of peak positions at time are presented in Figure 8. 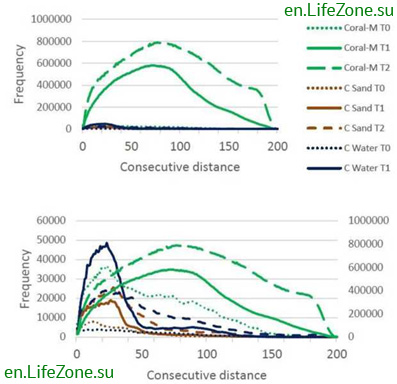 Figure 7: Graphs of the average frequency distribution of distances for mineral drop remnants of Coral Mine, control sand and control water before the test (TO), immediately after the test (Tl), and after additional 30 minutes (T2). 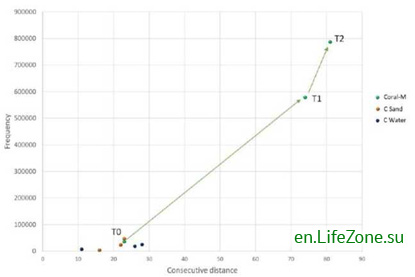 Figure 8: The position of the peaks of frequency distribution curves. Highlighted are the peak values and positions of Coral Mine water (green dots) before the test (TO), immediately after the test (Tl), and after additional 30 minutes (T2).

Analysis of consecutive structure reduction when blurring the evapo images of water drops gives some clues as to the complexity of the mineral remnants texture. The shape of the curve depends on the water. With our standard water, the most characteristic is the initial rapid fall of the curve (from photo blurring factor 0 to 0,625). Individual curves differ from each other in the inclination of decline to the first (local) peak at around 3,0. For easier comparison the standardized values are presented.

As we can see in Figure 9, at time TO all curves are similar, but they changed after the test (Tl). The most significant change was in Coral Mine water at time Tl and remained the same in T2 as well. The shape of the curve suggests a significant reduction in the complexity of evapo images. This is understandable because there are many more solid remnants, whereby the program takes this as one structure more quickly compared to other samples, where the remnants are more scattered. 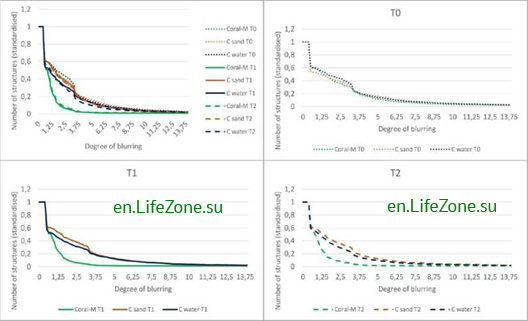 Figure 9: Reduction of the number of structures (standardized values) for consecutive blurring degrees of the evapo images of water drops before the test (TO), immediately after the test (Tl) and after additionally 30 minutes (T2). 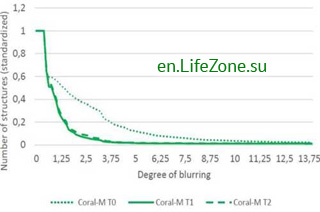 Figure 10: Reduction of the number of structures (standardized values) for consecutive blurring degrees of the evapo images of Coral Mine water drops before the test (TO), immediately after the test (Tl) and after additionally 30 minutes (T2).

For the layer analysis computer program divides evapo images into 120 concentric layers (rings) and determine the average luminosity of each, from the edge towards the center of the drops. In Figure 11 we can see that the shapes of control sand curves and control water curves are similar at all times. There is a tendency of lower luminosity on the edge of the drops and the peak of luminosity between 95th and 110th layer. The curves of Coral Mine are significantly different in shapes and values. The average luminosity of layers is higher compared to control sand or control water (see Figure 12), but also more evenly distributed between the 10th and 90th layer. The arrows indicate the shift of the local peaks between T1 and T2. The highest luminosity at T1 was determined at the 90th consecutive layer, but at time T2 the most luminous part of the drops was between 30th and 45th layer. There was only a slight correlation between luminosity and increased total dissolved solids (TDS), namely the measurements of TDS demonstrated that the Coral Mine water gained only 33% of TDS in comparison to control sand water. The increase in overall luminosity in the layer analysis and in comparison to waters with no coral calcium increased by more than 300%. 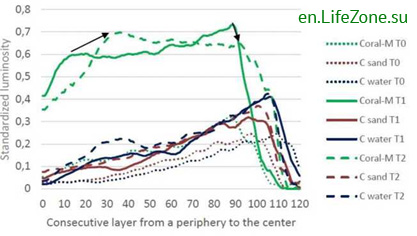 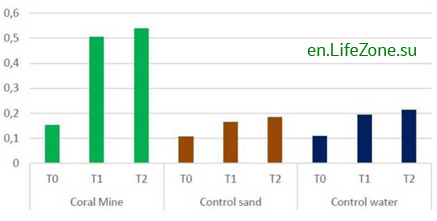 Figure 12: Average standardized luminosity of the evapo images before the test (TO), immediately after the test (Tl) and after additional 30 minutes (T2).

Luminosities for Coral Mine calcium (Coral Mine Tl and T2) were approximately more than 3x higher than for the rest. Since the TDS was higher only for 33%, we conclude that this difference arose from different deposition of remnants, indicating different water structuring.

The influence of The Coral Mine on water structure was evaluated by BionEvapo® method. Textures of dried mineral remnants of water drops were evaluated visually and by three computer analyses. Both, visual evaluation and computer analyses confirmed the influence of Coral Mine on water. It can be seen with the naked eye that the textures of the Coral Mine droplets’ remnants differed from the rest of the evapo images (control sand or control water). The water structure has changed in the first 30 minutes of incubation, and additionally after another 30 minutes, although the tea bag with Coral Mine was removed from the beaker. Frequency distribution analysis showed a higher number of distances between particles and also a shift of the curve’s peak to the right (compared to control sand or control water). Analysis of consecutive structure reduction (blurring) showed a rapid reduction of structures in Coral Mine water, indicating smaller structures/particles, which can be also seen with the naked eye. With the layer analysis we showed that most of these particles were located on the edge of the drops, whereas most of the particles in control sand or control water were distributed in the center of drops. While some changes in droplets’ textures can be attributed to the increase of total dissolved solids (TDS; from 99 ppm to 132 ppm), we observed additional changes between time T1 and T2, where a tea bag with Coral Mine was removed, indicating changes in water structuring that resulted in the change of solid remnants depositing at drying.

The concept of health